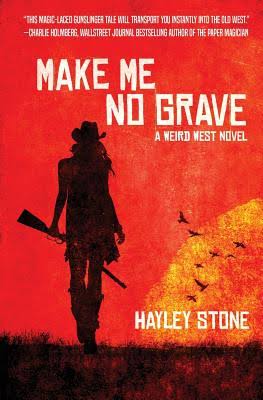 Make Me No Grave

Hayley Stone is one of those wonderful, rare writes who can turn a phrase of great beauty and unusual insight, while never veering toward tiresome purple prose. I really enjoyed her writing in this book. I’m also a sucker for tough, competent women finding love with deserving men. This is a Western with magical elements that do play a significant part in the plot, so the novel does fall under (mildly) weird Western. My main issues are the slow pace at the outset and the sometimes muffled or diluted action scenes (there are a number of gun fights and hostage situations). However, I ended up rooting for the characters (Marshal Richardson and outlaw Almena Guillory). Their relationship was given enough time to develop organically, and this evolution was presented with care and nuance.

The City in the Middle of the Night

I loved the writing in this book. Smooth and engrossing, with lots of emotion, without ever being overbearing. Just enough description to help us imagine the world, never so much to weigh the narrative down. I love secondary-world sci-fi, and this one hit the spot. However, the ending was underwhelming (the book stopped at a non-event rather than a more resonant scene) and felt rushed. A few threads remained dangling, fueling hopes for a sequel, but the author says there won’t be one. Overall, an enjoyable read, with a cool interplay of societal issues in human settlements, alien life and tech, and unforgiving environmental forces, as told through engaging, fleshed-out characters.